Yen Claws Back Losses on Softer US CPI Print

in Forex News
Reading Time: 48 mins read
A A 3 Trading Exit Strategies – How to Exit a Profitable Trade

Japanese Yen Claws Back Losses after Softer US CPI Print

The Japanese Yen posted a noticeable recovery immediately after the lower US CPI print yesterday and has continued to strengthen against the US dollar. Headline inflation printed at 8.5%, down 0.2% from the forecast and a whole 0.6% down from the June print of 9.1%.

Declining gasoline and oil prices were largely identified as the reason prices failed to advance month on month (0%) which has been welcomed by motorists and consumers as a whole. However, despite what looks like a step in the right direction, food prices have been accelerating for three straight months and rental prices are accelerating at their fastest pace in over three decades.

Prominent Fed members have already alluded to the possibility of softer CPI prints and how they will do little to derail a united Fed committee when it comes to rate hikes. Instead, members have been quoted saying they are looking for “compelling evidence” that inflation is slowing before revisiting their stance on tightening monetary conditions.

Clues of a bullish fatigue appeared ahead of the CPI report as prices struggled to test the 135.60 mark, where we witnessed multiple rejections revealed by successive upper wicks around 135.60. The next level of support appears at 131.35, which has acted as support and resistance and remains a key level as far as a bearish continuation is concerned. Thereafter, the psychological level of 130 comes into consideration.

Fundamentally speaking, the dollar remains relatively strong. The continued threat of US-China escalations and the prospect of continuing US rate hikes means that the dollar is likely to remain supported into Q4. Resistance appears at 133.20 followed by 134.50 and 135. USD/JPY could witness some sideways trading while waiting for the next catalyst. 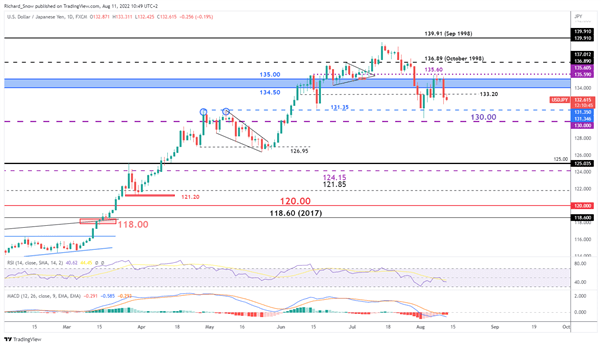 Implied probabilities derived from Fed Funds futures (market expectations) made a massive U-turn on Wednesday after the market anticipated a slow down in the pace of the September rate hike from 75 basis points (bps) to 50 bps.

On Tuesday, markets favored a 75 bps hike in September by roughly 68%. Fast forward to today, we see a 37.5% probability of 75 bps with 50 bs the new front runner at 62.5%. Lower anticipated rate hikes tend to be dollar negative as it represents a change in expectations and a lower future interest rate than originally expected. 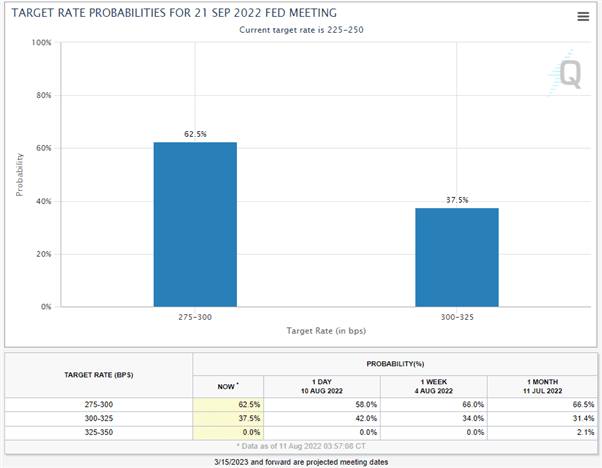 The weekly chart shows the decline in USD/JPY as a rather small percentage of the larger bullish advance. Therefore, a lot more is needed before a reversal can seriously be considered – particularly given that US and Japanese interest rate differentials will be increasing. 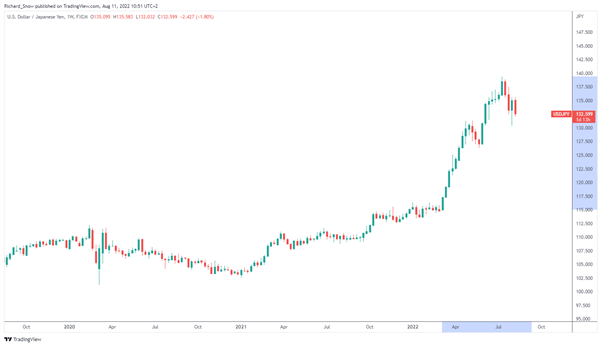 The economic calendar is rather light for the rest of the week. Today we see US PPI which I do not believe will have a massive influence on markets after yesterday’s CPI report. Lower producer prices rarely result in lower consumer prices as price setters in general are reluctant to lower prices. On Friday we have the University of Michigan’s consumer sentiment survey which has recovered after printing very close to the 50 mark in prior readings. The reduction in gasoline prices is highly likely to be front of mind for the surveyed participants and therefore, I imagine we could very well see another move higher. 3 Trading Exit Strategies – How to Exit a Profitable Trade Inflation Hits Double Digits as ECB Run Out of Options Here’s how this growth stock could boost my passive income!

This Robot choses Ethereum and 5 altcoins for massive short gains

UK shares: is this consumer goods stock a no-brainer buy?