The IHS Markit Flash Manufacturing PMI printed this morning at 39.8 versus the expectation of 38.0. Last month’s figure was revised down from 36.9 to 36.1, and came in well below the March print of 48.5. The April manufacturing print was the lowest on record since 2009, largely due to the pandemic. As economic indicators like this continue to point toward lower economic output, GDP comes back into the limelight.

This widely-watched indicator for us economic activity monitors changes in production levels from month to month. The index gives equal weight to new orders, production, employment, supplier deliveries, and inventories. The threshold for growth and contraction is at the 50 level. As can be seen in the chart below, this morning’s print may mark a turning point for the US manufacturing secotr, as we are now coming off of several consecutive months of decline. 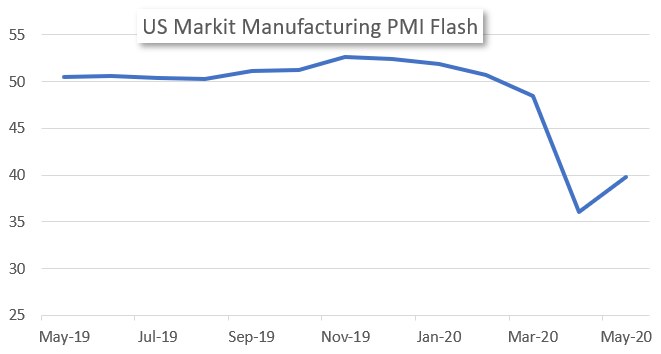 Since the late March sell off, the US Dollar has been range-bound between 98.0 and 101.0. Both support and resistance have been tested several times ahead of this release, but the USD appears to be heading lower on this morning’s print.

Our data shows traders are now net-short EUR/JPY for the first time since Apr...

Will Trade Wars Persist After the US Election?

US Dollar May Resume Rise Amid Global Recession Fears

US Dollar (DXY) Eyes Multi-Month Low But Speculators are Trimming Their...

US Dollar (USD) Outlook Remains Positive But Resistance Lies Ahead