USD/CAD extends the pullback from the monthly high (1.3646) as the Bank of Canada (BoC) retains the current policy in July, and the exchange rate may continue to give back the advance from the June low (1.3315) as the central bank largely endorses a wait-and-see approach for monetary policy.

USD/CAD approaches the July low (1.3491) as the BoC pledges to “hold the policy interest rate at the effective lower bound,” and it seems as though the Governing Council is in no rush to deploy more non-standard tools as the central bank plans to carry out “large-scale asset purchases of at least $5 billion per week of Government of Canada bonds.” 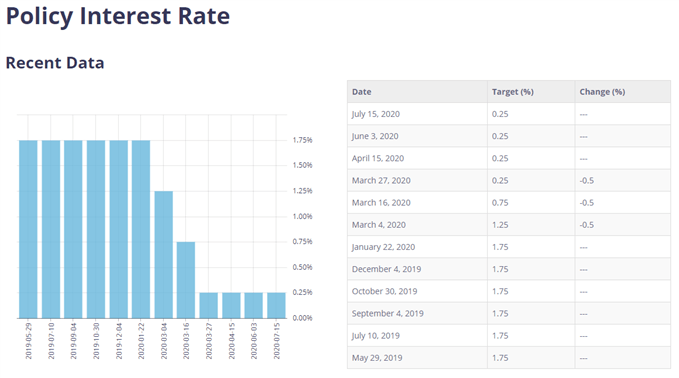 The BoC insists that the “the Bank is prepared to provide further monetary stimulus as needed,” but the update to the Monetary Policy Report (MPR) suggests the BoC will stick to the sidelines throughout the remainder of the year as the central scenario shows the Canadian economy growing “5.1 percent in 2021 and 3.7 percent in 2022.”

In turn, the BoC may tame speculation for additional monetary support as “the combination of the very low policy rate and asset purchases is providing considerable monetary stimulus,” but the central bank appears reluctant to drop the dovish forward guidance as Governor Tiff Macklem warns that “the exceptionally strong near-term growth of the reopening phase is likely to give way to a slower and bumpier recuperation phase.”

With that said, USD/CAD may continue to consolidate asit snaps the ascending channel formation from the previous month, while the advance from earlier this month unravels ahead of the June high (1.3801).

Oil – US Crude IG Client Sentiment: Our data shows traders are now at...

USD/CAD Stalls Near 2016 High, Will it Reverse?

Mr.Lionel Wallace discussed about the future money and cryptocurrency

e-WallStreet - December 27, 2020
A reporter, Sandy with MoomEx’s CEO Mr. Lionel to discuss the future of money, cryptocurrency and the blockchain in 2021. The discussion centered around...

Yen, US Dollar May Continue Higher Amid Global Recession Fears