One of the most prominent consequences of the coronavirus outbreak and the impact on financial markets has been a surge in correlation among assets. But sometimes the opposite can happen. In particular, I think that one of the most interesting shifts has been what seems to be a weakening relationship between certain energy exchange-traded funds (ETFs) and with crude oil prices, at least for now.

{{GUIDE|BUILDING_CONFIDENCE_IN_TRADING|Don’t give into despair, make a game plan}

On the chart below is the Fidelity MSCI Energy Index ETF (Ticker: FENY) with WTI crude oil prices. The former is a financial instrument that represents the performance of the energy sector in the United States equity market. The two largest holdings in FENY’s portfolio are Exxon Mobil and Chevron, composing 23.77% and 20.79% of the basket respectively. It is also very similar to Vanguard’s Energy ETF (Ticker: VDE).

Prior to the outbreak of the coronavirus, crude oil and FENY often tended to trade in unison. The 20-day rolling correlation often stayed positive. Correlation does not imply causation, but for companies like Chevron and Exxon Mobil, the price of energy is a key determinant of profits. As such, oil prices declining can shrink revenues. In this situation, their respective stocks tended to fall in value and vice versa. Then came Covid-19.

In late March, FENY started to trade higher despite oil prices continuing to decline. In fact, the former climbed despite oil futures briefly dipping sub–zero in April. The two started trading higher again afterwards as energy prices recovered. However, as oil set higher highs in June, FENY diverged and instead set lower lows. What could explain this behavior? 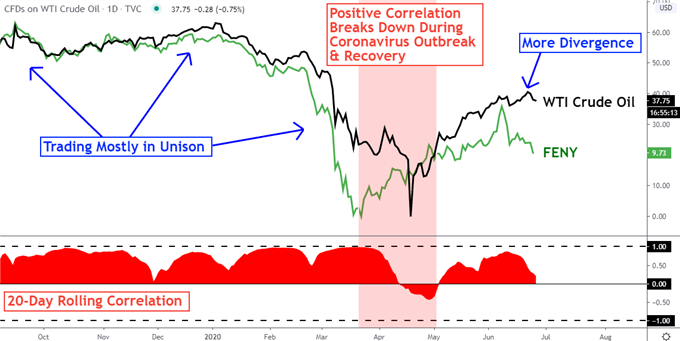 The Shift in Fundamental Dynamics

To help understand this change, let’s bring the S&P 500 into the picture. The US benchmark stock index is a frequent bellwether for gauging overall market mood. That is because economic conditions in the world’s largest economy can domino outwards. On the next chart below, the relationship between FENY and S&P 500 futures was not clear cut prior to the Covid-19 outbreak.

Then as financial markets collapsed globally, the correlation between the two quickly rose close to 1 and stayed elevated. Values closer to this number indicate a positive relationship. So even though crude oil prices were falling in April, FENY was rising alongside the S&P 500 as governments and central banks around the world embarked on aggressive efforts to stimulate growth.

As such, one could argue that the fundamental focus for energy sector ETFs shifted towards the broader outlook for global growth and overall liquidity conditions and away from the price of oil. This may be due to the importance of interim solutions to keep businesses running through the pandemic. According to Bloomberg, oil industry businesses got $1.9 billion in tax benefits from the CARES Act earlier this year. 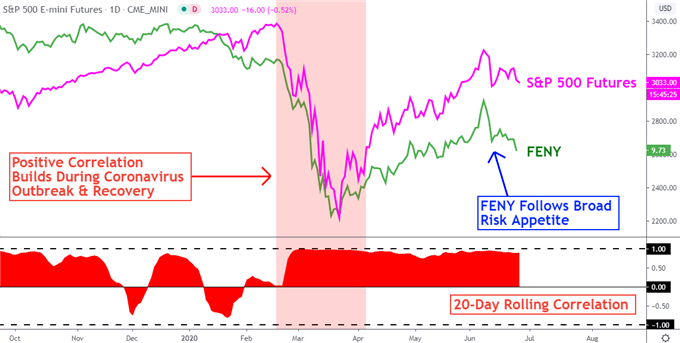 At some point in the future, one could argue that as the global economy recovers, the price of oil may become increasingly important for energy companies. For the time being, it seems that the focus instead could remain on general risk appetite. The Canadian Dollar is another example of a more-liquid asset that can at times follow crude oil prices, but see its fundamental dynamic shift around this market environment.

So what is the road ahead for risk appetite? Virus cases in the United States have been worryingly rising as regions relaxed lockdown restrictions. Recent hotspots include Texas, California and Florida. The former’s governor recently halted new phases of economic reopening. An introduction of isolated lockdowns could derail swift growth recovery bets and perhaps discourage consumer spending habits if travel is depressed.

Meanwhile tensions between the world’s largest economies over Hong Kong risk rising. This is as the United States could potentially pursue about US$ 3.1 billion tariffs against certain nations from the European Union. Next week, all eyes will turn to the FOMC meeting minutes from this month’s interest rate announcement. If cautious commentary about the growth outlook is reiterated, this could rekindle risk aversion.

From a technical standpoint, it could be argued that the S&P 500 remains in an uptrend. I have drawn new rising support on the daily chart below – red line. The 50-day simple moving average (SMA) is fast approaching and it could guide the index higher. Conversely, a daily close under the SMA (with confirmation) could open the door to a deeper reversal. Uptrend resumption entails a close above 3231. 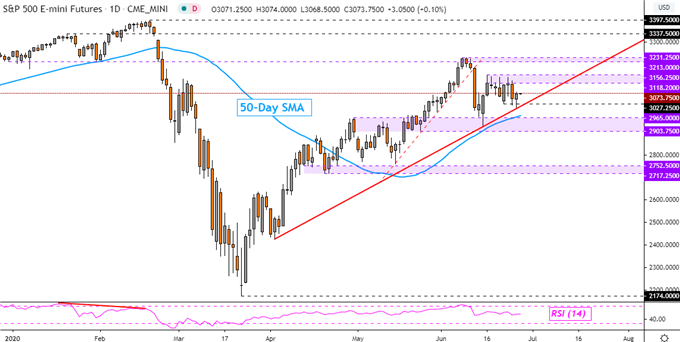 Indian Rupee Gains on US Tariff Rollback Proposal, Nifty 50 to...