Ahead of the RBNZ rate decision next week, the New Zealand Dollar has struggled to climb higher against its major counterparts, with the exception of the US Dollar. It is expected that the central bank will look to address the recent appreciation in the Kiwi, given its jawboning at the prior monetary policy.

As we mentioned in the currency seasonality report, the New Zealand Dollar has a tendency to weaken throughout August. As such, with the RBNZ expected to maneuver next week, the seasonal trend may well remain intact. In turn, this has raised our interest in the New Zealand Dollar vs the Canadian Dollar (NZD/CAD). 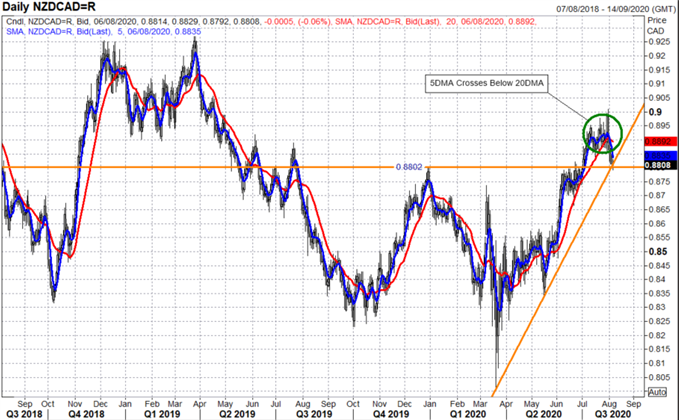 Last weeks rejection from the 0.9000 looks to signal an interim top with the cross, while momentum signals follow a 5DMA break below the 20DMA suggest that risks are tilted to the downside. That said, with prior resistance, now support at 0.8800, it will take a close below to open the doors towards the 0.8700 handle. At the same time, the Canadian Dollar remains buoyed by the continued lift in the energy complex with Brent crude futures recently closing its early March OPEC price war inspired gap lower. Alongside this, NZ/CA 10yr bond spreads have also trended lower, having peaked since early July, suggesting that there is more room to the downside. 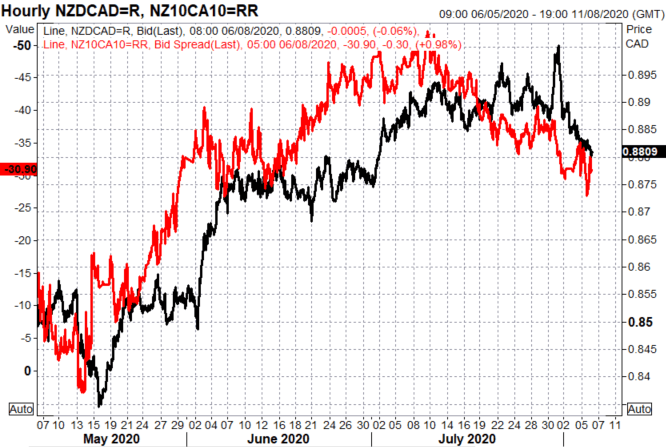 The Past, Present and Future of the DAX 30

Risk-On Recovers Swiftly but Road Ahead is Bumpy

US Dollar May Rise, Eyeing Breakouts in USD/SGD, USD/MYR, USD/PHP