Home Market Data How Does the Stock Market React to the First US Presidential Debate?

Is the First Presidential Debate a Market Mover?

In the early hours of the morning (at 0200BST if you are based in the UK) market focus will be on the first Presidential debate between Donald Trump and Joe Biden. As it stands, the national polling average points to a rather comfortable lead of 6.4ppts for Joe Biden. However, those without short memories will remember quite clearly how far the polls were in favour of Hilary Clinton over Donald Trump in 2016.

How Did Markets React to 2016 Presidential Debates

Taking a closer look into the 2016 presidential debates, it had been judged that Hilary Clinton had won all three debates against Trump. However, given the election outcome, it goes to show that the debates are not the be-all and end-all. Alongside this, the reaction in risk appetite to the debates in 2016 saw little in the way of notable movements in risk appetite. Although one point to note is that this debate will take place ahead of month-end rebalancing, which has been touted to be equity positive according to various investment bank models given the underperformance in equities this month. (What is the month-end impact on FX) 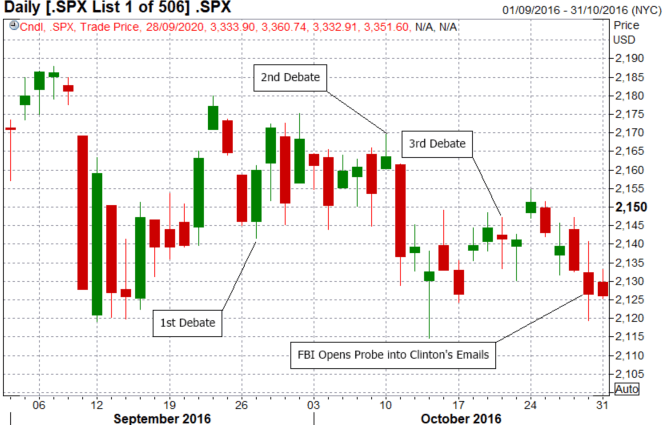 The presidential debate will be in the format of six questions across six segments. This areas will involve:

Market Outlook Ahead of the First Biden-Trump Presidential Debate

For Humans Only: Five Tips for Outstanding Customer Service

Our data shows traders are now net-long NZD/USD for the first time since Jun...