Gold prices are sliding fast as traders react to July 2020 FOMC minutes that just crossed the wires. Fed officials discussed the potential use of yield curve control as a tool for conducting monetary policy, but details showed little appetite for this possible approach. A sharp rebound staged by the US Dollar in response to the FOMC minutes is likely exacerbating renewed XAU/USD weakness. 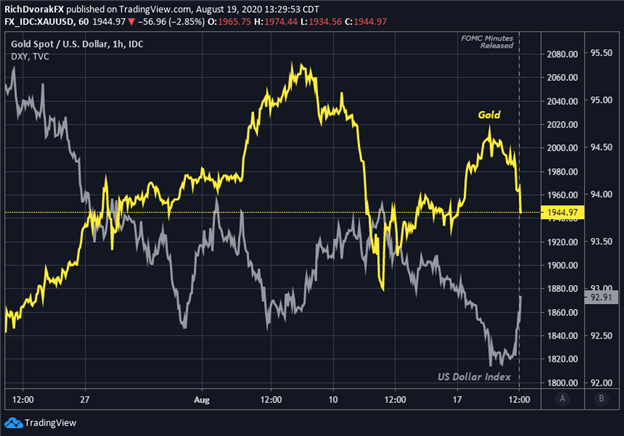 The FOMC minutes noted that while yield curve caps, or targets, could be used as an effective tool, it was also stated that potential requirement for “very sizable amounts of government debt under certain circumstances could pose risks to the independence to the central bank.” Gold prices reacted negatively to the news seeing that yield curve control likely would have served as a bullish fundamental driver due to a fixed lid on Treasury rates. FOMC minutes also suggested that the Fed is growing less optimistic on a robust economic recovery during the second half of the year. Perhaps this explains the upbeat reaction by the US Dollar given its posturing as a top safe-haven currency.

That said, the FOMC minutes also noted how large-scale asset purchases “were effective in the wake of the previous recession” and thus becomes part of the monetary policy toolkit. Looking ahead, language hinted at a preference of forward-guidance. This brings the upcoming Jackson Hole Symposium front and center as a potential platform for the Federal Reserve to outline the path forward as the economy recovers from the coronavirus pandemic.

USD/CAD Rebound may be Short-lived

Big Support Holds Ahead of FOMC

Beware the Bubble? The US Stock Market Cap-to-GDP Ratio