GBP/USD sliding after US Presidential debate

GBP/USD is slipping back modestly after the US Presidential debate prompted a minor move into safe havens, particularly the US Dollar, out of assets seen as more risky such as stocks, AUD, EUR and GBP. While the debate yielded little new, it heightened concerns that President Donald Trump might not accept the result and that the outcome could therefore be delayed. 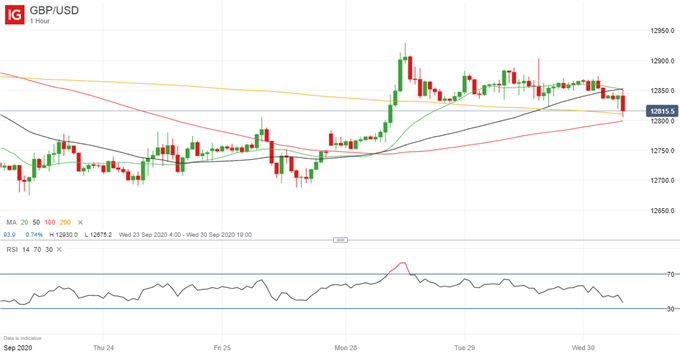 The latest economic data from the UK were mixed, with the second-quarter contraction in GDP revised to 19.8% quarter/quarter from the original estimate of 20.4% – still a record decline. However, Bank of England Governor Andrew Bailey forecast Tuesday that economic activity was probably about 7-10% weaker between July and September than before the coronavirus pandemic and had finished the third quarter growing more strongly than in the period as a whole.

You can read here how GDP data affect forex trading

Bailey also said that the central bank was realistic about the challenges negative interest rates would pose for the banking system, but repeated he was not ruling them out as a way to help the UK economy.

By contrast, the UK housing market remains buoyant, according to the Nationwide house price index. This recorded an increase of 5% year/year in September, above both the forecast 4.5% and the previous month’s 3.7%.

Note though that GBP/USD is still reacting more to the ebb and flow of risk sentiment than to the UK data.

Sunny Saturday and the Risks Are Rising