Gold continued where it left off during Asia-Pacific trade, bursting back above the $2,040/oz mark as yields on US 10-year Treasuries fell back below 55 basis points and the US Dollar extended its remarkable decline.

The haven-associated Japanese Yen lost ground against its major counterparts as the sentiment-gauging USD/CNH exchange rate fell to its lowest levels since early-March.

Growing Covid-19 Case Numbers May Drag on the Euro

European Central Bank Chief Economist Philip Lane believes that “further progress in persistently containing the virus will be central in determining the size and speed of the [Euro-zone’s] economic recovery [and] while there has been some rebound in economic activity, the level of economic slack remains extraordinarily high and the outlook highly uncertain”.

With that in mind, the growth-linked Euro may come under pressure in the coming weeks as novel coronavirus cases climb in several of the European Union’s member states.

Given the ECB’s commitment “to providing the monetary stimulus needed to support the economic recovery and secure a robust convergence of inflation towards our medium-term aim”, a marked increase in infections could see the central bank ramp up asset purchases through its €1.35 trillion pandemic emergency purchase programme (PEPP). 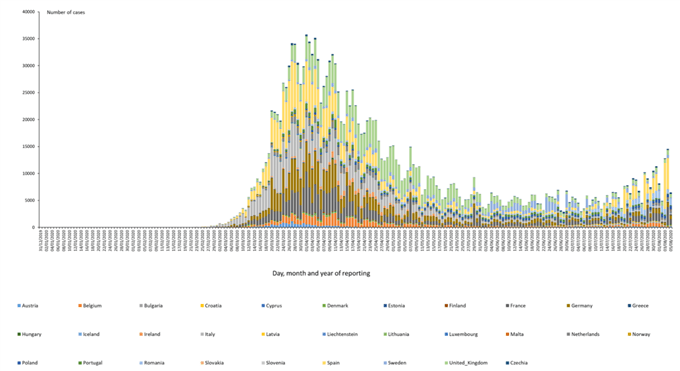 However, Lane noted that “there has been a reduction in the pace of PEPP purchases in July” as the trading-bloc continued its nascent recovery from the “extensive lockdown measures implemented in April”.

This falls in line with the relatively positive economic data seen this week, as manufacturing and composite PMI releases surprised to the upside and year-on-year retail sales figures showed consumer spending rose 1.3% in June.

Nevertheless, investors should continue to monitor EU health developments, as the reimposition of economically devastating lockdown measures could take some wind out of the Euro’s sail and result in a near-term pullback against the haven-associated US Dollar and Swiss Franc. 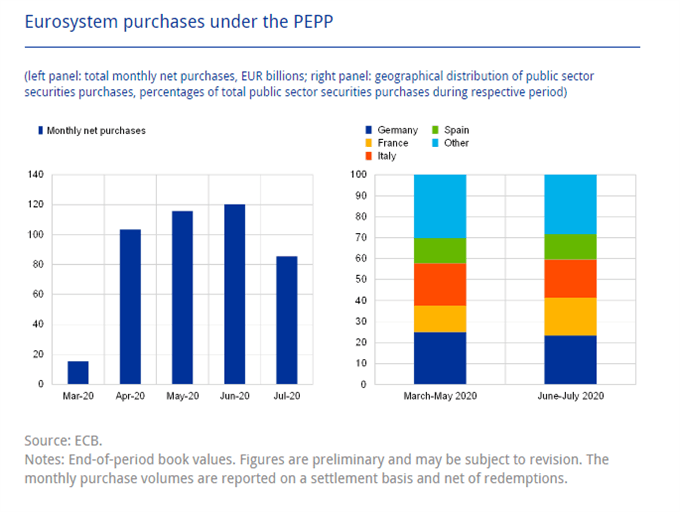 From a technical perspective, the EUR/USD exchange rate may continue to consolidate just shy of the psychologically imposing 1.19 level, in a similar fashion to the range-bound conditions seen through June and mid-July.

However, this period of consolidation may prove short-lived as the MACD soars to its highest levels in over two years and the slope of the 50-day moving average (1.1430) notably steepens.

Moreover, the premature formation of a Bull Flag hints at an impending top-side surge should price clear resistance at the July high (1.1909).

To that end, EUR/USD rates look set to oscillate between the 1.17 and 1.19 levels as the RSI retreats from last month’s extreme overbought readings, with a daily close below the monthly low (1.1696) needed to invalidate the bullish continuation pattern. 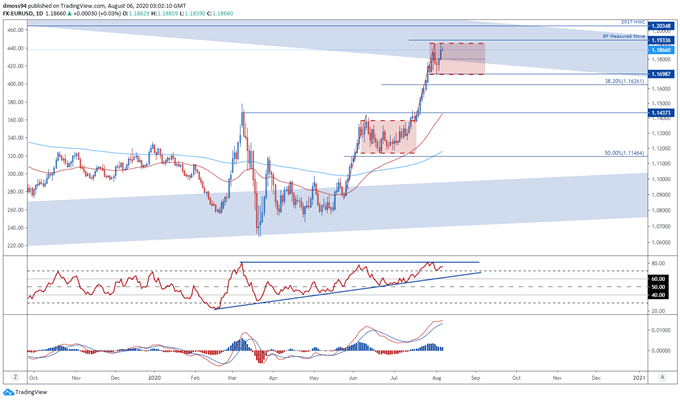 EUR/CHF Running Out of Steam at 2-Year Downtrend

EUR/CHF rates seem to be running out of steam after pushing back above the sentiment-defining 200-day moving average (1.0743) at the tail-end of July.

Known as a proxy for risk appetite, the fading momentum seen in price may be reflective of souring market sentiment, as the growth-sensitive exchange rate fails to break above two-year downtrend resistance.

With price seemingly capped by the July high (1.0838), a short-term correction back to the monthly low (1.0739) looks on the cards as the MACD begins to cross below its ‘slower’ signal counterpart.

A break to fresh monthly lows probably indicative of a surge in risk aversion and likely coinciding with a notable increase in haven flows.

Conversely, should buyers overcome the 2018 downtrend and break above the July high (1.0838) a resumption of the rally seen in regional risk assets is more than likely. 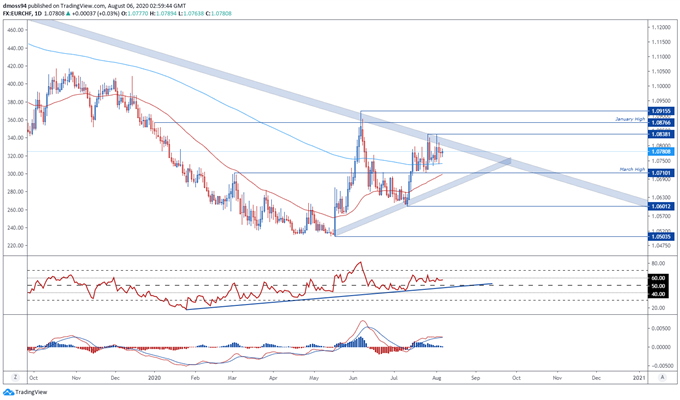 Do I need more than a target-date fund?

USD/CAD May Melt Higher After Pull Back