48 DAYS UNTIL THE US PRESIDENTIAL ELECTION

Polling data from Politico as of September 16 shows former Vice President and Democratic nominee Joe Biden maintaining a strong lead over President Donald Trump in the general election. Taking an average of the three polls minus the one from Rasmussen Reports show Mr. Biden has been keeping his approximately 7-point lead over the incumbent. 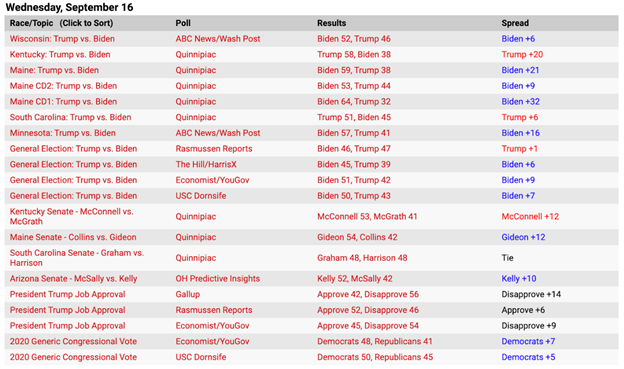 His rising popularity may also be the result of the contrasting disapproval of the current president. According to Gallup, Mr. Trump’s job approval shows a dismal 14 disapproval spread with the Economist/YouGov showing a similar rating with a 9-point spread. Having said that, this spread may narrow if the economy’s recovery begins to accelerate heading into the election.

On Wednesday, the World Trade Organization (WTO) ruled that Trump’s $200b worth of tariffs against Chinese goods in 2018 violated international trade rules. The ruling by the 3-person panel struck at the heart of credibility Washington was relying on to justify the levies they imposed on the Asian giant.

The acknowledgement of the lack of legitimacy of the tariffs by an internationally-recognized, independent third-party body could make employing similar measures in the future difficult. This new development adds another layer of complexity in the upcoming election and what the future global trade regime might look like under another four years of President Trump.

Washington justified the tariffs by claiming that China’s abuse of the international trade system and intellectual property theft needed to be met with a strong counterforce. The decision was met with anger by officials in Washington, with the U.S. Trade Representative Ambassador Robert Lighthizer saying that:

“The United States must be allowed to defend itself against unfair trade practices, and the Trump Administration will not let China use the WTO to take advantage of American workers, businesses, farmers, and ranchers”.

Tensions between the US and China are already high from a myriad of geopolitical issues ranging from Beijing’s national security law in Hong Kong to escalation in the South China Sea. This is compounded by the fact that both sides have still yet to meet and discuss “Phase 1” trade talks to address unresolved issues.

These issues will likely persist and may escalate if Mr. Trump is re-elected and pursues his trade war with China. Phase 1 was one part of what will likely be a multi-iterated trade agreement that will likely roil commodity markets as part of the process. In this scenario, if cross-border investment slows, demand for growth-anchored assets like crude oil may fall.

After breaking below the early-June uptrend – pressured by the pre-OPEC dropoff in early-March – crude oil prices fell over 13 percent before stabilizing around 39.40 per barrel. Looking ahead, Brent may steadily rise again to retest a key inflection point at 45.51, which if cleared could precede a bullish spike. 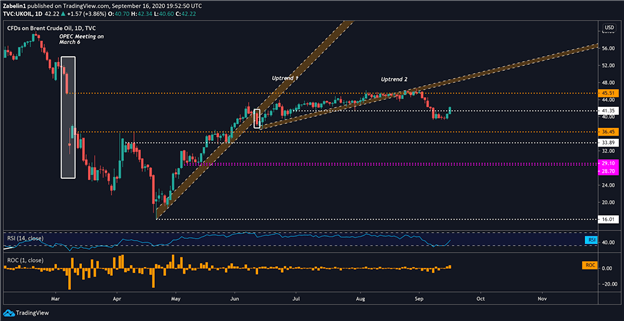 Early signs of economic stabilization may have contributed to Brent’s rise in combination with robust, market-wide risk appetite. This was buttressed by the Fed’s upward revision of what growth and unemployment will look like in the US by year-end. Optimism around stabilization may push growth-anchored commodities higher though clearing the hurdle at 45.51 will be key.

Mr.Lionel Wallace discussed about the future money and cryptocurrency

e-WallStreet - December 27, 2020
A reporter, Sandy with MoomEx’s CEO Mr. Lionel to discuss the future of money, cryptocurrency and the blockchain in 2021. The discussion centered around...