Equity markets are firmly in the green with risk assets supported by increased hopes over the effectiveness of the Remdesivir drug in treating patients with coronavirus. Alongside this, markets have also taken kindly to plans by the Trump administration to reopen the US economy. Subsequently, risk sentiment has shrugged off the extremely weak Chinese data, in which GDP contracted by 6.8%, against expectations for a drop of 6.5% (first contraction since 1992). 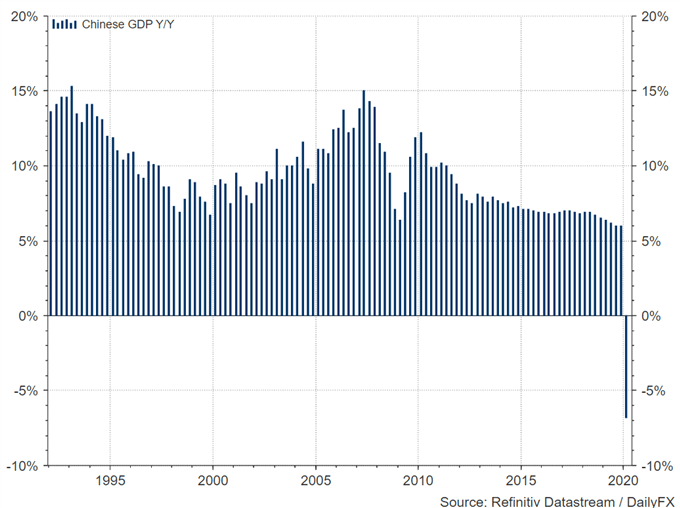 However, in light of the optimism surrounding Gilead’s drug trial, the company had later stated that the anecdotal data does not provide statistical power to determine safety and efficacy and thus the current rally in risk may be somewhat of an overreaction, leaving equities vulnerable to a fade. That said, eyes will be on the phase 3 results due to be released at the end of this month.

In recent sessions, the DAX has continued to find support on dips to 10,200. As such, this would be the first hurdle for sellers to overcome and extend a move south of the 10,000 level where a close below the 23.6% fib could confirm a near-term top. That said, we would look for a retest provided resistance at the 50% Fibonacci retracement situated 10,900 holds. Failure to hold however, would likely put the 11200-400 gap in focus, which risk capping rallies in the index.

The Euro Stoxx 50 has continued to struggle with gaining a foothold above 2900. While a closing break above the 38.2% Fibonacci retracement is encouraging, the index is still not out of the woods yet with key resistance situated at 2990-3000 yet to be challenged. That said, the Euro Stoxx 50 would need to see a close break below the 23.6% Fibonacci to set a near-term top in this corrective rally.

Silver Lags Gold as Covid Haven Thanks to Much Higher Industrial...

S&P 500, VIX, USDJPY, Gold Follow the Progression of Fear Towards...