The Australian Dollar is like all other assets likely to remain in thrall to the battle against coronavirus in the coming week, which may not prove good news for its bulls

There is a major domestic data release on tap in the form of official inflation data for the first quarter. That’s coming up on Wednesday. Annualized price rises are expected to come in ahead of the 1.8% level seen in the last three months of 2019, possibly nudging back above the 2% base level of the Reserve Bank of Australia’s target band.

In more usual times rising prices would have the markets either on watch for a rate increase or, at least, less certain that cuts were coming. However, these aren’t usual times and in the past week Reserve Bank of Australia Governor Philip Lowe has cautioned that current, record low interest rates could be in place for years yet.

This is all-too-likely to blunt the effects of the data, even if markets don’t now find first quarter numbers too historic for their use anyway given. The current month is outside the scope of the numbers and, from widespread, virus-related lockdowns to the oil market’s astonishing collapse, there’s been plenty to chew over.

The Australian Dollar has fought back quite strongly against the US dollar since mid-March, benefitting as did most other growth-correlated assets from massive international stimulus and rescue programs aimed at offsetting the coronavirus’ economic effects.

However, the overall downtrend in place all year remains in place, and, as the Aussie will remain vulnerable. It’s a bearish call this week. 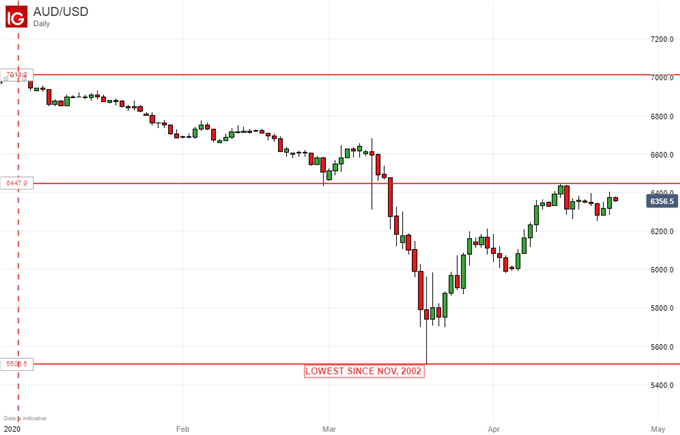 BTC/USD A Rally or Consolidation?