The Australian Dollar seems to be making another attempt at re-engaging with its dominant downtrend following a rebound from mid-March lows. Negative RSI divergence spoke to ebbing upside momentum on a test of the 0.62 figure, and has been followed by a push through near-term rising trend support.

It is thus far unclear if what is to follow is a period of sideways consolidation or true bearish resumption. Establishing a foothold below immediate range floor support at 0.6050 would make for a compelling argument in favor of the latter scenario. A test of the 0.59 figure may follow.

Alternatively, a break and hold above the 0.6200-14 zone might neutralize current selling pressure. From there, the stage may be set for a move higher to challenge from the underside former support in the 0.6430-59 region, now recast as resistance. 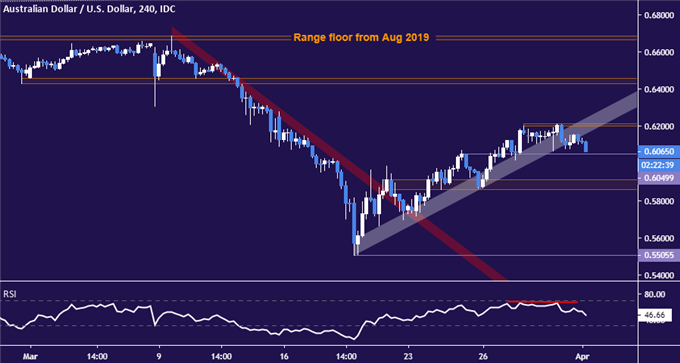 AUD/USD Trading Preparation for the Week Ahead 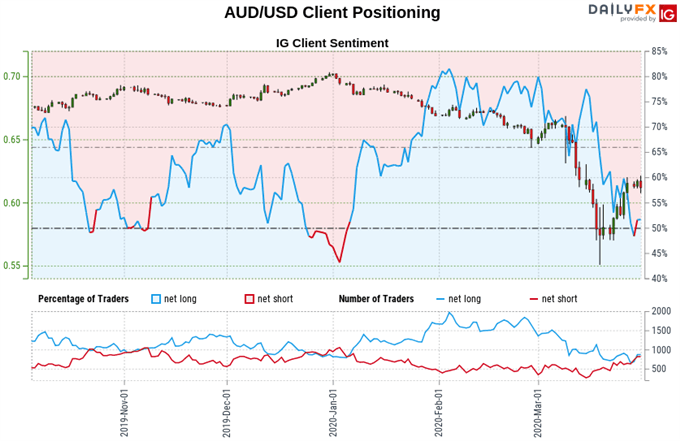 Retail sentiment data shows 53.41% of traders are net-long, with the long-to-short ratio at 1.15 to 1. IG Client Sentiment (IGCS) is typically used as a contrarian indicator, so traders being net-long suggests AUD/USD may continue to fall.

Furthermore, the net-long skew in traders’ exposure is now more acute than yesterday or compared to the prior week. That seems to bolster confidence in a bearish bias. Nevertheless, the overall disparity between longs and shorts is relatively mild, warning that sentiment-based signaling may not be very potent.

Weekend Reads: Billions of Reasons to Be Yourself

Cryptocurrencies: The Rise of Decentralized Money

S&P 500 Breaks Anchor after FOMC Decision, Will GBPJPY React to BOE and BOJ?

When Does Volatility Equal Risk?