Albania’s prime minister has appealed to western Balkan leaders to reject overtures from outside powers and keep the faith in their EU membership dream.

Edi Rama said Albania would “never give up on Europe and on the EU, whatever the shape of the EU in the future” while aiming a dig at the bloc’s politicians for being too influenced by nationalist pressures.

Speaking to the Financial Times, he conceded it was frustrating to wait. But as Russia, China and Turkey all court the region, Rama said such suitors, which he did not name, were inappropriate. “The others can bring money, investments, maybe even caviar, but they won’t be able to bring what you need to build a functioning free country,” he said.

The remarks came as Bosnia to the north faced its most serious political crisis since the civil war ended 25 years ago, triggered by a rise in secessionist talk by the hardline leader of the Bosnian Serb entity.

Rama said he worried about rising nationalism in Bosnia but that nationalism in the EU was now a bigger obstacle to the ambitions of those in the region to join the 27-member bloc.

The EU had not “recovered” from the 2015 refugee crisis, he said, when more than 1m people sought asylum in Europe, mainly fleeing the Syrian war. Since then the EU had been “driven from fear and not from aspirations”, and governments “which are not extreme in themselves” are “influenced by the extremes”. 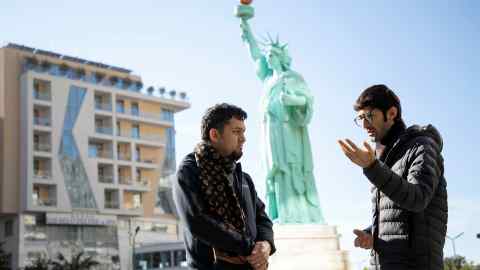 Of the “western Balkan six”, Albania along with Serbia, Montenegro and North Macedonia are candidates to join the EU, while Kosovo and Bosnia are potential candidates. The region has big problems with corruption and commitment to the rule of law, but as Rama implied, the political calculations of EU members have also played a part in the delays in the 18 years since the block pledged to let them in once they had fulfilled the criteria.

“Albanians have their own disappointments with Brussels, but this doesn’t change the conviction that we have to be there,” he said. “We’ve consumed all the love stories before, and the marriages,” he added in an implicit reference to the ties first with Russia and then China that Albania had in the communist era. “We’re looking for a new marriage, not for old ones. But of course, this kind of marriage is difficult.”

Rama, in his third term, has been promoting the idea of a common regional market that all six countries agreed to in November 2020. In a bid to accelerate the process Albania, along with Serbia and North Macedonia, signed up to implement some of its provisions. “If we do this in the Balkans, this will be the best deterrent against craziness and if we don’t do it, nobody will do it for us.”

He conceded the other three were reluctant. “Bosnians, because they cannot decide on anything, apparently, Montenegrins because they’re still under the illusion they can enter the EU next year, and every next year becomes the next year . . . Kosovo because of problems with Serbia, which I think can be addressed better when people sit down and talk.”

As for Albania, which has in the past 30 years undergone a painful transition to rebuild its economy after the end of its strict communist regime, he said “it can be a place where people can enjoy life. Never 100 per cent disciplined, where everything will work like a Swiss watch or a German whatever, but never boring.”

S&P 500 Wobbles as Bank Earnings Due, China GDP in Focus

AUD/USD Unimpressed as China GDP Beats Estimates. Where to Next for the Australian Dollar? AUD/USD Unimpressed as China GDP Beats Estimates. Where to Next for the Australian Dollar?

Are the FTSE 100’s top income stocks a bargain?

BTC/USD Sitting with 21% Pullback in May: Sally Ho’s Technical Analysis 23 May 2022 BTC